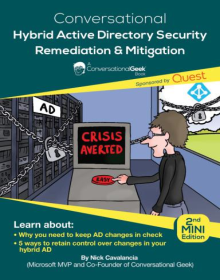 You probably already realize the criticality of Active Directory (AD) security today. With AD serving as the basis for many on-premises and cloud-based applications, as well as many security platforms, along with the natural extension of on-premises AD into Office 365, the potential security exposure increases — requiring more vigilant focus on your AD.

In this informative e-book, cloud expert Nick Cavalancia explores why it’s necessary to put a focus on being able to both maintain a proper state of AD security, and to also have a plan to diminish the possibility to further bad changes in the future. Learn two key aspects of keeping a handle on AD changes: