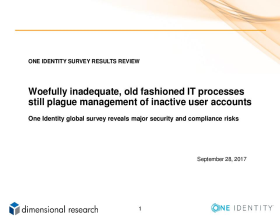 One Identity’s far-reaching State of IAM global survey, which collected data from more than 900 IT security professionals from around the globe, found sobering realities and disconcerting conditions in how organizations handle user provisioning and de-provisioning. Despite years of high-profile breaches, it turns out that a significant number of organizations still aren’t close to applying modern best practices to their identity and access management, which leaves them and their users vulnerable to attacks and data breaches. Is your company, one of them?

See key findings from our survey and compare your organization’s IAM practices to see where you stand. We found that: